I love roses and everyone knows pink is my favourite colour; so here’s some pretty roses just starting to bloom in my garden.

The flowers on my table were sent by a friend at Christmas time, they were so pretty! 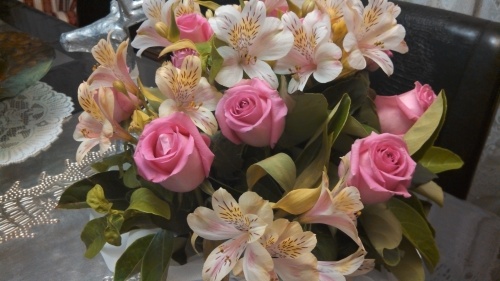 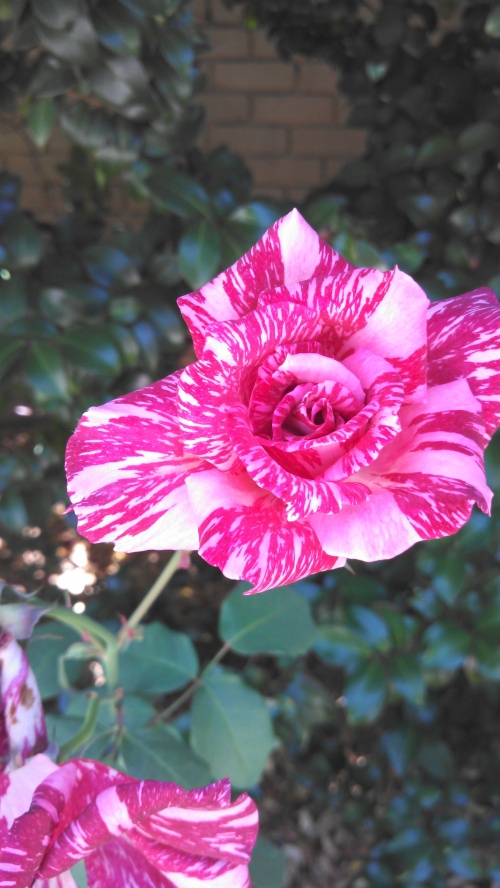 Have a great day!

I could hear a motorbike sound and vaguely remember someone talking to me and pricking my finger, I fell again;back in to a deep sleep.
Someone was calling my name, I  thought I saw an angel but when I finally opened my eyes right up, I realised it was my sister. I told her someone had died, she said nobody had died, Paula, you took an overdose and you’re in the hospital.

I couldn’t believe it, god no! I’m not suppose to be alive.
I cried so much and didn’t stop crying for days, what do I do now, how can I face everyone.
God what have I done, this can’t be happening, this isn’t what I planned.

I’ve never felt so alone and terrified in my life, I pleaded with my husband to take me home; I knew if they had read my suicide note, I wouldn’t be able to leave.
He told me I needed help and to be patient, that I was in the right place and would be getting all the help I needed to get better again. I even texted my sister and mother pleading to get me out of there, but they couldn’t.

This is not what I wanted; someone to get inside my head and work out why I tried to commit suicide. I was angry that my husband had called an ambulance and even angrier at myself for not getting it right.
So after lots more crying and having to open up to the hospital  psychiatrist, the descision to admit me to physiciatric care was made, (or should I say forced upon me) either I admitted myself to Perth Clinic ( A private institute for people with psychological disorders ) or I would be taken to Greylands (public system).

Everything I had ever heard about Greylands made me scared to go there, so reluctantly; I was going to Perth Clinic.
The crying I did in the first few days was enough to last a lifetime, at the end of the day it wouldn’t have mattered where I went; Perth Clinic or Greylands, they both would have wanted me to tell the truth of what brought me to want to commit suicide.

For privacy reasons I won’t mention the name of my shrink, all I can say is they saved my life.
After telling him my story and what led me to where I was, it was decided that I would have to have an ECT. I had refused to eat for a few days, as I was punishing myself for living.
No matter how hard I tried to stop crying I couldn’t, so the  best thing to help stop the crying and help the mending process, was to start with a series of ECT’s, along with some anti-depreassants.
Not too long after my first ECT the crying had calmed a little, but the good thing was that I could drink something. I became addicted to Milo, how strange is that!
If it wasn’t for Milo I would have been put on a drip (Go Milo) 🙂
I proceeded to live and nourish myself on Milo for the next month.

The sadness I had endured for years was all about to be revealed, I was there for 1 month, had 15 ECT’S  and even more severe headaches from them.
But at the end of the day they saved me, and I know that to be the truth.

I had lots of therapy and oddly did lots of colouring in, actually it was really therapeutic.
My husband bought me flowers and the way I was feeling at the time I had no interest in them, but a few days later; I ws in bed crying again. When I looked up and saw the flowers on top of the T.V, I began to feel different about them; all of a sudden I liked the colour, the box they were in and the shapes. From that moment on, I was totally obsessed with flowers and wanting different colours! Pink was the main colour actually, I wanted anything that was pink, pink textas, pencils etc.

I have found solace in the colour pink, to this day; it calms me and brings me a happiness like no-other.
I now appreciate and enjoy the company of flowers.

Filed under My treatments

...BECAUSE IT'S STYLISH TO TALK ABOUT MENTAL HEALTH, ESPECIALLY HOW WE MAINTAIN OUR OWN.

BSB MOTTO - Experiencing the world through a fractured reality. Today,tomorrow, together

A blog to make you laugh and think, and it reads even better with a drink.

A blog full of humorous and poignant observations.

My Pain, My Life, My Struggles, My Fight

my rantings, observations and silly thoughts

Tales from the mouth of a wolf

A thousand years of despair, well no more!

The latest news on WordPress.com and the WordPress community.

A bipolar journey is a crazy wild ride.

A Journey Into A Unique Mind

Sharing my journey as a mum with Aspergers, Bipolar, Anxiety and PTSD

the secrets of my scratch paper

Prose and poetry that needs to be spoken and shared.

where would-be writer works with words

"Spreading my creativity and vision one IP address at a time"

Story of a white pearl that turned to ashes while waiting for a pheonix to be born inside her !

Adventures of Bacon and Friends

Change The Way You Cope With Stress

These days, It is natural for any individual to be consumed with stress. If you want to take action and find solutions on ways to cope with stress and attain a much more stress-free life, then this site is for you.

Endeavour To Soar With Verbal Imagery

The World as I see it

The sea and me

Footprints on the Sands of Time

My journey, chronicled in words, pictures and feelings

Sharing my journey of life

Random thoughts about random topics of the most random thing....Life

A trip through life with fingers crossed and eternal optimism.