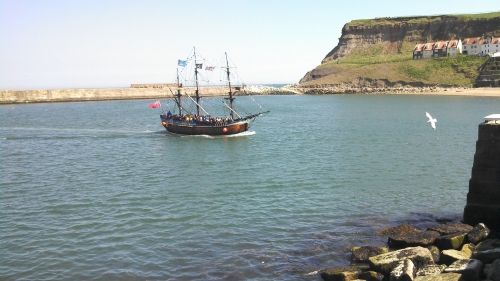 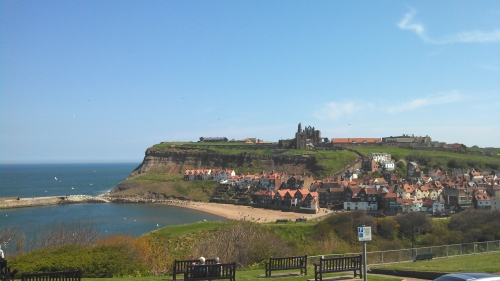 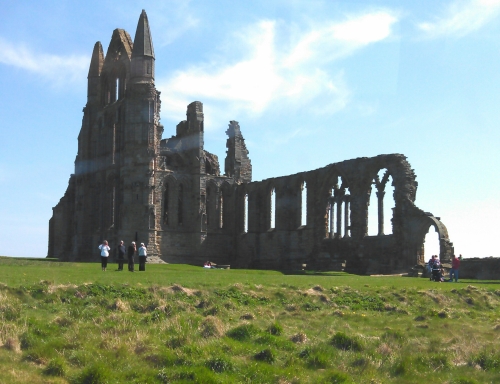 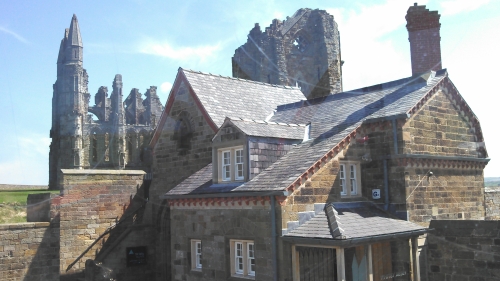 We went for a day trip to a pretty coastal town called Whitby.

Whitby is famous for connections such as Captain Cook living here – it was the port of departure for all of his voyages of discovery and where he became a seaman. It was where Bram Stoker wrote the book Dracula and the town is featured in the first few chapters.  Also, Lewis Caroll (who wrote Alice in Wonderland) was supposedly inspired to write his poems The Walrus And The Carpenter from his walks along Whitby Beach. Additionally, The Lady Of The Ladle was set in Whitby.

It’s also famous for Whitby Jet which is black fossilised wood – similar  to today’s monkey puzzle tree and the Araucaria tree, but it looks like polished gem stone. It was at its height of popularity when Queen Victoria’s husband Albert died and she used it as mourning jewellery.

One of the photos above is of the ruins of Whitby Abbey.

The last photo above is of the Whitby Jet that my mum and step father bought.

I’m off to Dubai in today and will be there for 2 days.

I’ll post more photos when I return to the magical land of Oz!!!!

We’re off to see the wizard!! LMAO

Filed under My experiences, What makes me happy

17 responses to “Photos of Whitby”

...BECAUSE IT'S STYLISH TO TALK ABOUT MENTAL HEALTH, ESPECIALLY HOW WE MAINTAIN OUR OWN.

BSB MOTTO - Experiencing the world through a fractured reality. Today,tomorrow, together

A blog full of humorous and poignant observations.

My Pain, My Life, My Struggles, My Fight

my rantings, observations and silly thoughts

Tales from the mouth of a wolf

A thousand years of despair, well no more!

Insights From A Bipolar Bear
The WordPress.com Blog

The latest news on WordPress.com and the WordPress community.

A bipolar journey is a crazy wild ride.

A Journey Into A Unique Mind

Sharing my journey as a mum with Aspergers, Bipolar, Anxiety and PTSD

the secrets of my scratch paper

Prose and poetry that needs to be spoken and shared.

where would-be writer works with words

"Spreading my creativity and vision one IP address at a time"

Story of a white pearl that turned to ashes while waiting for a pheonix to be born inside her !

Adventures of Bacon and Friends

Change The Way You Cope With Stress

These days, It is natural for any individual to be consumed with stress. If you want to take action and find solutions on ways to cope with stress and attain a much more stress-free life, then this site is for you.

Endeavour To Soar With Verbal Imagery

The World as I see it

The sea and me

Footprints on the Sands of Time

My journey, chronicled in words, pictures and feelings

Sharing my journey of life

Random thoughts about random topics of the most random thing....Life

A trip through life with fingers crossed and eternal optimism.